The 21th Peliti Seed Festival will take place in Greece, at the land of Peliti in Mesochori Paranesti, Drama Prefecture Greece, on Saturday, September 4 from 10:30 a.m. to 15:00 p.m. 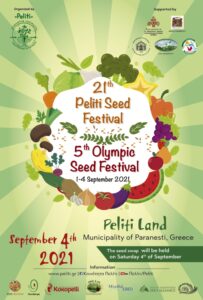 It is with great pleasure that we invite you at the 21th Peliti Seed Festival.

The Peliti Seed Festival 2021 will run in parallel with the 5th Olympic Seed Festival, (from September 1 – 4, 2021) suggested by Peliti at the World People’s Assembly which was held in The Hague, from 14 to16 October 2016.

The event of seed celebration, which took place for the first time on 1999, at Karpi village in Kilkis, Greece, was the first public exchange of seeds in Greece, as well as one of the earliest seeds celebration globally.

2000: the celebration took place at Pomakika villages, on the mountains of Rhodope prefecture, in Greece.

2001: the celebration took place in the town of Serres, Northern Greece.

From 2005 to 2009, the celebration was hosted by the Holy Monastery of the Honorable Forerunner, at the Anatoli village on Kissavos Mountain of Greece. During those feasts, due to the assistance from the nuns, the celebration expanded. It was then that the celebration date has been established to be the first Saturday after the Orthodox Easter, each year.

On 2012 and 2013 the International Days of Seeds were also held in parallel.

On 2013, the Austalia’s seedsavers reffered to the celebration as the Largest Seed Exchange in the World.

2014 was the starting point for the International Solidarity Caravan for Seeds.

On 2016 the theme was: seeds, immigrants, refugees, solidarity.

On 2017, the 1st Olypic Seed’s Festival was organized. Seventeen (17) countries from all over the world have participated and it was then that we created the declaration of the celebration.

On 2018, the 2nd Olympic Seed’s Festival was organized. Seventeen (17) countries from all over the world have participated.

On 2019, the 3rd Olympic Seed’s Festival was organized. Ten (10) countries from all over the word have participated.

The festival has inspired thousands of people worldwide, encouraging them to organize corresponding celebrations in Greece, Bulgaria, Turkey, Cyprus and other countries.

Every year, thousands of people (on 2018 we had more than 6000 visitors) not only from Greece but also from all over the world participate in the festival.

It is now time, also, for you all, to tune in and focus on collecting seeds from the varieties you cultivate, becoming, thus, one of those who will offer some seeds and a lot of happiness in the 19th Seed Festival of Peliti. One of Peliti’s philosophical principles is to support the freedom of man to hold his own seeds, so that, each year he is not dependent, neither on the market nor even on Peliti.

We encourage all of you that either have received seeds from Peliti during the previous years, or you keep up traditional varieties, to come this year on Festival 2018, in order to offer rather than receiving seeds. The festival is open to anyone who is interested, regardless of his/her cultivating seeds or not. The cultivation of traditional varieties and their free distribution is a profound political action. By the term “political” we mean the action we choose to solve the agricultural, environmental, economic and social problems of our country and not only. Peliti’s Seed Festival is a picture from the future. Everyone offer to the community, and, through that action, everyone has what they need. This is how we envision our future. We all offer to the community and we all have free access to all goods. This way, the festival can be organized through the voluntary offer of work, food, materials, seeds, plants, music, etc. All these are offered freely at the festival (seeds, plants, food, music, dance, speeches, activities, etc).

Those of you who will bring your seeds or plants, you have to inform us, about it, the latest by February/ 15th 2020. This is important for us to best organize and protect the festival.

Cultivators who will offer seeds, should carry at least 50 sachets from each variety plus one sachet from each variety, for the Peliti Seed Bank. The Seeds on Peliti’s Seed Festival are shared free of charge.

Seeds must be packed in paper bags indicating:

Farmers who are unable to make this package should inform us in time, before February 15th 2020, so that we will take over the packaging.

We suggest that growers and breeders bring also photographic material (not promotional material). Cultivators and breeders will have stands where they will present their work, their seeds or their animals.

Cultivators and breeders, upon their arrival at Peliti will receive from the secretariat – if they have not already received it beforehand – the special badge with their name.

The distribution of seeds and plants

The seed and plant offer will be made from 10:30 a.m. on the basis of the special coupons which can be obtained from the celebration secretariat, at the entrance of the estate. Visitors coming to the event will receive four coupons. Coupons are distributed free of charge. Each coupon corresponds to a seed bag and immediately afterwards it is voided. This means that you need to be aware of what exactly you want to collect. You might consider that the four sachets are not enough. We believe that this amount of seeds is a very good start or continuity for your garden. Finally, whatever we can not get can be taken by our friend. This way, throughout the exchange, we will also receive it. Besides, exchanges are one of Peliti’s key objectives. The coupon system also has its drawbacks, but for now we have not found a better way for the distribution of seeds and plants.

In the land of Peliti there is the forest of wishes. Here they can go children and adults. In the Forest of Wishes, we enter silently and respectfully. Here is the tree of wishes. When you get there you will recognize it from your heartbeat. Sit quietly in the tree of wishes and ask him for what you want. You should only be careful about what you will ask for. Why the tree has the power to help you satisfy your desire but has no judgment what is good and what is bad. In the forest of wishes reside and the fairies that help the plants to grow up. If you are lucky you can meet them.

See the exact location of the Festival

Connect the place you live with Peliti, we are all tuned and connected.

21th Peliti Seed Festial and 5th Olympic Seed Festival will be closed with fertility customs by the Cultural Association of Pagoneri K. Neurokopiou Drama, member of the Center for Cultural Development of Eastern Macedonia.

And much more that you will see and live at the festival.

You can request information from :

It would be great if you would like to support financially Peliti’s actions and we thank you for this in advance.

By depositing in Peliti’s Bank Account:
Piraeus Bank of Greece

The 21th  Peliti Seed Festival, organized by the Community of Peliti, www.peliti.gr

with the kind support of :

The   Region of Eastern Macedonia and Thrace, www.pamth.gov.gr

The   Municipality of Paranesti, www.paranesti.gr

The Center of Environmental Education of Paranesti, www.kpeparanestiou.gr

The Union of Cypriot Farmers

The Association Kokopelli in France, www.kokopelli-semences.fr